Clinical data can provide valuable insights for Pharmaceutical research, such as mining adverse event data to reveal opportunities for drug repositioning. For example, an analysis of public clinical trials data in ClinicalTrials.gov identified lower incidence of gastric cancer in patients treated with Aliskiren, a treatment for hypertension, than those treated with the placebo, suggesting the possible repurposing of this drug to treat cancer [1].

However, one of the fundamental challenges associated with clinical data is that the information captured for a given clinical study is very specific to that study, typically resulting in a bespoke database for each trial with no common schema. While this may not be a problem when analysing data for that specific study, the data is not interoperable, resulting in a barrier to performing translational research.

During last year’s SciBite User Group Meeting in Boston, Cathy Marshall (Director, Genomics Data Informatics Strategy & Implementation) and Alicia Dana from Pfizer (Data Strategy Lead for Medicinal Sciences) gave an excellent presentation on the evolution of Pfizer’s Data Commons project, which has the goal of enabling scientists to develop and refine hypotheses by investigating correlations between genetic and phenotypic data.

In 2012, the initial version of Pfizer’s Data Commons was based on the deployment of tranSMART to provide a single platform to collect both clinical and genomic data. However, while tranSMART does have a unifying schema for all studies, Pfizer’s experience has been that the mapping of each new study requires extensive curation effort from technical and scientific experts. In addition, because tranSMART has been designed with data capture in mind, Pfizer were unable to perform broad, cross project queries in support of research hypotheses.

More recently, Pfizer have integrated SciBite’s Gene, Drug, Species and Technology vocabularies into their Data Commons 2.0 platform, augmented with proprietary dictionaries of internal study and compound IDs and a new dictionary based on CDISC standard for Measures. This gives Pfizer the possibility to semantically enrich data from a range of unstructured documents in file shares and repositories such as ELN and SharePoint. 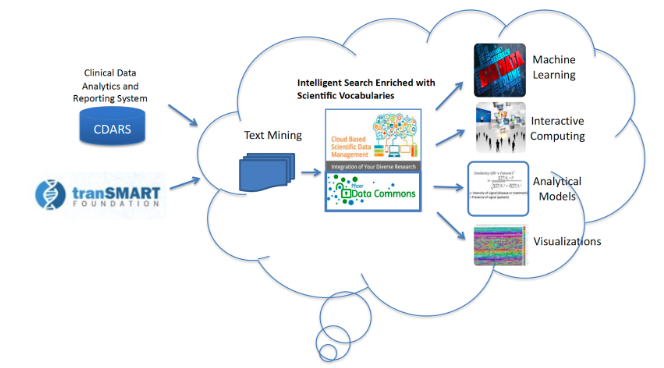 According to Alicia, this approach has required “minimal data manipulation, removing the need for formal curation” and has resulted in “an ontology-based index which enables intelligent searches using broad English term queries tailored to the translational/exploratory research domain”.

For example, users can now perform faceted, ‘Amazon-like’ scientific searches such as:

Cathy and Alicia also described how the ontology-based index can be used to power downstream applications, from Spotfire-based visualisations and statistical models to machine learning algorithms. We look forward to hearing how Pfizer’s Data Commons continues to evolve.